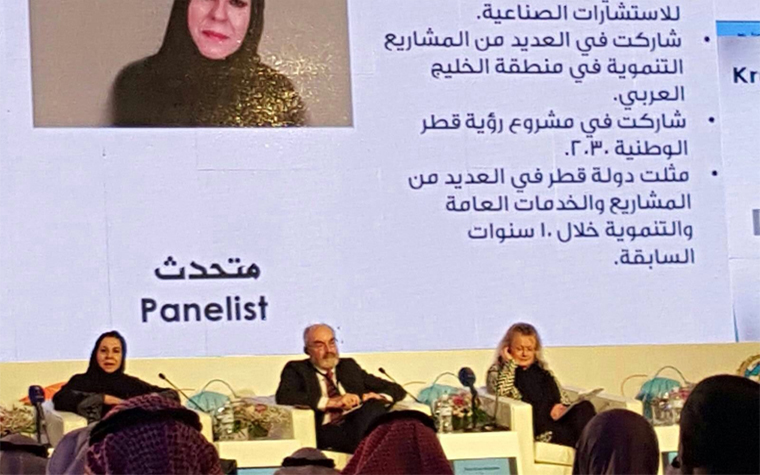 GOIC takes part in the “Contemporary Functions of States from a Knowledge Economy Perspective” conference | goic.org

The Gulf Organization for Industrial Consulting (GOIC) recently participated in a conference supported by Kuwait Emir Sheikh Sabah Al-Ahmad Al-Jaber Al-Sabah to develop ways to improve productivity and efficiency through different governmental authorities, strengthen the knowledge of investment procedures and build a structure to educate those interested in the investment industry.

At the conference, "Contemporary Functions of States from a Knowledge Economy Perspective," GOIC Strategic Planning Consultant and Knowledge Economy Expert Laila Diab Shrair delivered a presentation on the role of innovative environment in supporting knowledge systems.

When addressing knowledge-based industries, Shrair explained the five main elements of the industry.

"We can talk about the first level of a pyramid, the base, which constitutes the economic foundations to include the five main elements of knowledge industries: human resources - GCC countries achieved a remarkable improvement by expanding the range of basic education, high school and higher education, however it often requires a parallel advancement at the level of the quality and quantity of labor force know-how; policies aiming at developing knowledge-based industries - GCC countries adopted excellent macroeconomic policies, although trade policies might differ, they are generally strong with specific needs to overcome restrictions and implement intellectual property and foreign investment policies; capital and financing - financial liquidity is abundant in most GCC countries, but these countries need to expand necessary financing structures to develop knowledge-based industries; innovation systems - they are the collective assets and operations creating and promoting innovation in trade applications, and GCC countries are currently deploying modest efforts and they need more efforts at this level; infrastructure to develop knowledge-based industries - GCC countries have a relatively advanced infrastructure allowing for the development of knowledge-based industries, but additional policy amendments are still required.”

Shrair went on to explain the second and third level of the industry pyramid and what types of businesses are included in each.

“The second level in the middle of the pyramid is shaped by support industries and related industries that include information services and consultation and marketing services,” Shrair said. “As to the third level at the top of the pyramid, it includes clusters of knowledge-based industries sought after by GCC countries.”

Shrair explained how to introduce the knowledge-based industry to GCC countries that are welfare-states lacking an adequate manufacture culture.

"Knowledge-based economies and industries sometimes have a so-called 'missing pillar,' a social pillar relating to social and cultural standards and values of a certain society," Shair said. "In fact, people's productivity culture is still weak and we need to strengthen it by teaching children updated curricula that include this culture. It is also to be spread via media outlets that have a direct influence on people's ideas and values. In addition to that, we need to focus on a set of values that highlights the importance of productivity and improves the social status of scientists. Furthermore, we have to overcome financial obstacles impeding researches and the work of researchers to access knowledge-based industries."

Shrair commented on the complacency of knowledge-based industries and the consequences on the transfer of knowledge and technology.

“GCC countries are deploying relentless efforts to develop their economic legislations to attract foreign investors,” Shrair said. “Nevertheless, these countries face a number of difficulties and challenges in doing so because of a lack of clear strategies to draw these investments in some of the GCC countries. Anyway, prospects are still looking good for GCC countries in several industrial activities.”

Shrair highlighted sectors like water treatment, a segment that is thriving in Saudi Arabia, nanotechnology in concrete materials, bio-refineries in the chemical and petrochemical sectors, nanoparticle-reinforced solar technologies, sensors for environmental and many others as the productive industries that lead the way in the GCC for knowledge-based industries.