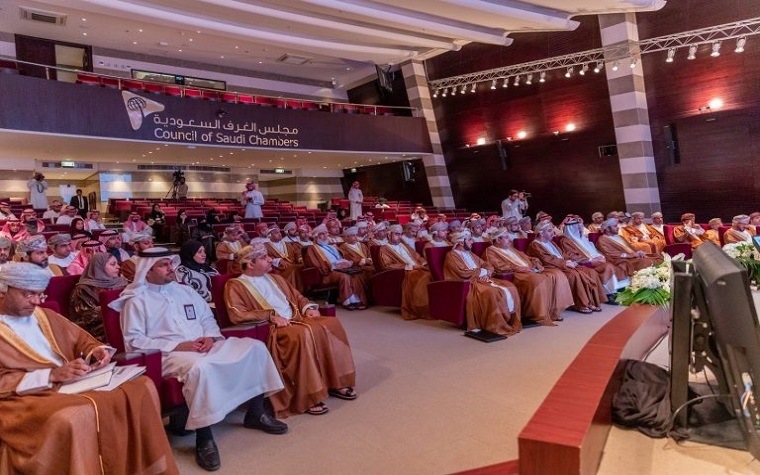 The Council of Saudi Chambers organized this morning (Sunday) in its headquarters, the Saudi-Omani Investment Forum, in the presence of His Excellency the Governor of the General Investment Authority, Engineer Ibrahim Al-Omar, and His Excellency Mr. Yahya bin Saeed Al-Jabri, Chairman of the Board of Directors of the General Authority for Promotion, Investment and Export Development, and Chairman of the Council of Saudi Chambers Dr. Sami Bin Abdullah Al-Obeidi, and the Chairman of the Amman Chamber of Commerce and Industry, Mr. Qais Al-Youssef, with the participation of a number of Saudi and Omani business officials and owners.

Dr. Sami Al-Ubaidi, Chairman of the Council of Saudi Chambers, stressed that this meeting comes in light of the new trend of the government and private sectors in the Kingdom towards strengthening economic relations with our brothers in the Sultanate of Oman, especially as this approach was launched with the support of all government agencies in the Kingdom, in order to coordinate and cooperate In all economic fields, and to find out the investment and commercial opportunities available to the business sectors of the two countries. There is no doubt that this approach places more responsibility and importance on this forum, as we look forward to producing practical results and recommendations that can be implemented on the ground.

In turn, Engineer Ibrahim Al-Omar, Governor of the General Investment Authority, said that the joint forums for the business sector in the Kingdom and the Sultanate of Oman represent an important platform for exchanging ideas and visions to find more investment and commercial partnerships, in light of the cooperation and coordination witnessed in the two brotherly countries in various fields of trade and investment.

Al-Omar added that the volume of trade exchange between the two brotherly countries reached approximately 9 billion riyals until the end of the third quarter of 2019, and the total Omani exports to the Kingdom amounted to about 5.9 billion riyals, while Saudi non-oil exports to Oman amounted to about 3.4 billion riyals, It represents 10.4% of the Kingdom's total exports to the Gulf Cooperation Council states, confirming that the Kingdom and Oman are abundant with promising investment opportunities, which provide fertile ground for establishing diverse investment partnerships between the Saudi and Omani business sectors.

For his part, Mr. Yahya Al Jabri, Chairman of the Board of Directors of the General Authority for Promotion, Investment and Export Development in the Sultanate of Oman, stressed that economic relations between the Sultanate of Oman and the Kingdom represent a fertile field that contributes to achieving the desired goals that the leaders of the two countries aspire to.

Al-Jabri reviewed the areas of economic development that the Sultanate worked on and which could be a window for economic integration between Oman and the Kingdom, including the establishment of a direct land port linking the two countries with a total length of more than 680 km, which is expected - soon after its opening soon - to contribute to the expansion and acceleration The size of the trade and investment exchange between the two countries, as the road reduces the distance between them by more than 800 km, and this port will open the way for the movement of goods from the Kingdom through the land roads in the Sultanate and to its ports that will facilitate the export of Saudi goods to the world.

The proximity of the land port to one of the most important private investment centers in the Sultanate is the free economic zone in Duqm, as the region is only about 200 kilometers from this port, and the area - which is located on an area twice the size of Singapore - welcomes Saudi and foreign investments in general, and offers an integrated package Among the facilities and services available to it, as well as other incentives, including tax exemptions that extend to 30 years renewable, and the right to use the land for periods of time up to 50 years renewable.

The establishment and development of special investment centers, with competitive advantages that support the investor, include seven industrial cities in different locations, three free zones in Salalah, Sohar and Al Mazyona, a special economic zone in Duqm - which we have mentioned - and the Knowledge Oasis in Muscat concerned with the technical sector, as the Sultanate has embarked on Starting the development of the land port and the logistic village in the South Al Batinah Governorate within a project called (safes), and these investment centers offer special incentives for investors, and we in this regard, we confirm our welcome to Saudi companies wishing to invest in these centers, in addition to offering exemptions from the Som taxes for tourism projects in the Governorate of Musandam, who recently came under the guidance of the Order of His Majesty the Sultan may God protect him and that the exception of any applicable regulations in this regard, within a strategic location include identification of (60) for tourism investment in Musandam Governorate.

And the issuance or issuance of a number of new economic legislations or updating them, to be in line with the international best practices in force in this field, which have constituted a qualitative shift in the system of investment and doing business in the Sultanate, another incentive added to the list of incentives that we hope investors will benefit from to create their projects and start Their businesses in Oman.

For his part, Qais Al-Youssef, Chairman of the Oman Chamber of Commerce and Industry, said that this visit includes the largest Omani trade delegation to the Kingdom, which is looking to enhance trade and economic partnerships between the two brotherly countries, in the hope that this meeting will be held annually by alternation between the Kingdom and the Sultanate, and that Because the economic file and diversification of income sources as an alternative source of oil and attracting investments remains the current priority in our two countries according to our future lines 2030 for the Kingdom and 2040 for the Sultanate, and undoubtedly the Saudi and Omani private sector have the biggest role in pushing the wheel of economic development in close cooperation with the government.

While the meeting witnessed a presentation by the General Investment Authority, it addressed the goals of the Kingdom's 2030 vision and the promising investment opportunities it embraces, as well as the Kingdom's efforts to improve the investment environment and facilitate business practice.