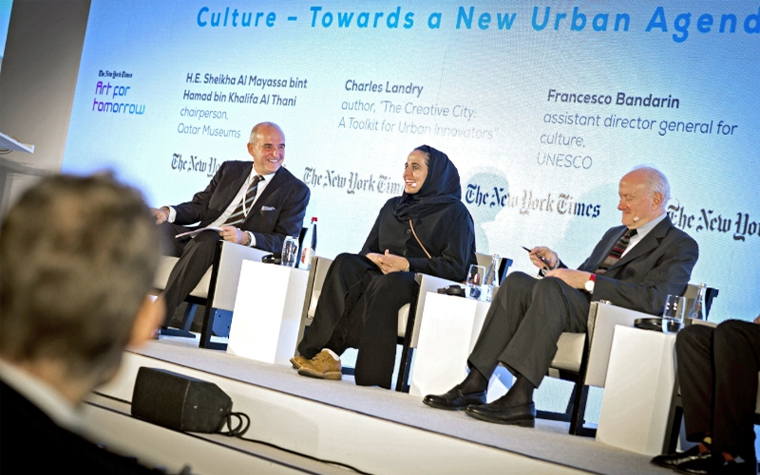 Technology, Creativity and the City, the second edition of The New York Times Art for Tomorrow conference, concluded March 15.

The conference concentrated on the compound relationships between the ever-evolving digital world and the role physical art houses play in the future of a technology-based generation. The theme delved into the idea of tying the digital elements of the modern world to the creative process and how that can help build stronger cities and even nations in our world today. The event, hosted at the W Doha Hotel & Residences, was conducted with the support of Qatar Museums (QM) Chairperson Her Excellency Sheikha Al Mayassa bint Hamad bin Khalifa Al-Thani.

“We're trying to bring contemporary artists here, to inspire young artists to see what's happening around the world, and to be inspired,” Her Excellency Sheikha Al Mayassa bint Hamad bin Khalifa Al-Thani, QM chairperson, said. “That's what we've tried to do and will continue to do, with complete respect to our tradition.”

One of the most memorable experiences of the conference was The Art Lab. The piece was a pop-up gallery that spanned the entire 29th floor of W Doha Hotel & Residences. On display within the work was art renderings from His Royal Highness Prince Nikolaos of Greece and Denmark, Pia MYrvoLD, Androulla Michael, the Google Cultural Institute, Laurence Winram, Omar Khalifa, Sheikh Hassan Al Thani and Ali Hossaini.

“W Doha stands shoulder to shoulder with HE Sheikha Al Mayassa, as well as Qatar Museums, in not only believing that arts and culture are the heart of any civilization, but in the importance of fostering such creativity in the ongoing development of the city of Doha,” Safak Guvenc, area manager Qatar and Oman, Starwood Hotels & Resort and General Manager of W Doha, said. “W Doha is delighted to host again on its second year such a distinguished group of thought leaders, and to be part of the meaningful progress in how art is evolving and how it will shape our futures, both locally and internationally.”

The destination sponsor of the conference is Qatar Tourism Authority and Qatar Airways acted as the official airline partner. The headline sponsors for the Art for Tomorrow Conference are Sotheby's and QNB. Jaidah Holdings and W Doha Hotel & Residences are the host sponsors.