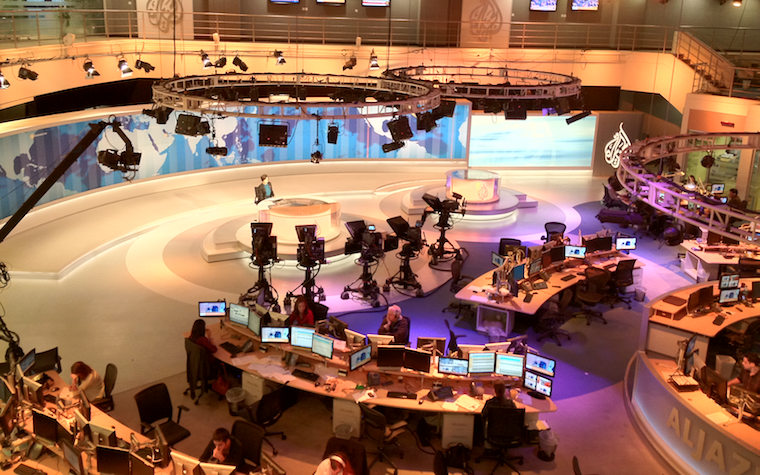 In April, the screens went dark on Al Jazeera America as the network, owned by Al Jazeera Media Network in Qatar, stopped broadcasting; its short-lived stint as a Western alternative media source was tumultuous and marked by drama and controversy.

Some staffers alleged a misogynistic and anti-Semitic environment, while others claimed of being terrified to cross CEO Ehab Al Shihabi.

At the same time, the network faced economic and audience challenges. What started out as an ambitious effort to champion long-form journalism led to some success before it started to become apparent that the network wasn't financially solvent and lacked the support it needed to continue over the long-term.

However, many of those looking at the network’s checkered past hadn’t really understood how difficult the financial situation was until the past few months.

Recent news reports show that Anand Gupta, who used to be an executive vice president at Al Jazeera America, is suing the network, claiming he was denied a promotion because of discrimination.

The discrimination lawsuit is interesting in its own right, but in some ways, the headline should be that documentation for this suit reveals an alleged $500 million operating shortfall for the network in 2013 and 2014. That's a staggering amount of money and remarkable even by industry standards.

Stephanie Hemelberg is the author of a compelling article about Arabic and Western media titled “Between the headlines of the Israeli-Arabic conflict: The coverage of CNN and Al Jazeera” that takes a look at how different networks provide different points of view to viewers. Hemelberg works at Alma Makers in the San Francisco Bay area.

"There were lots of reasons why Al Jazeera America failed,” Hemelberg told the Gulf News Journal on Thursday. “Al Jazeera's 'how to' was extremely different from most media in the Western world, especially in the U.S. The low audience that ended up stealing Al Jazeera's destiny can be caused by the dissident journalism they were characterized for. There's also the fact of the current Qatar economy being far from stable.”

“Money management in the media industry is incredibly unrealistic,” Hemelberg said, adding that although networks may be very loose with operating expenses, that rarely means they’re willing to compensate journalists or even executives well. She also feels the network faced an uphill battle in terms of making things work, partly because of a lack of clarity.

“From my personal perspective, it was almost an impossible quest, since there was never a sustainable business model.” Hemelberg said.

However, she added, the accusations against the network should certainly be part of the equation.

“I think the shameful accusations that have been raised against the network constitute their biggest failure,” Hemelberg said. “Not only because it is not reforming their image, but because it is creating even more stereotypes.”

As for the network, Al Jazeera America representatives declined to comment on the $500 million loss and how that factors into the network’s reputation.