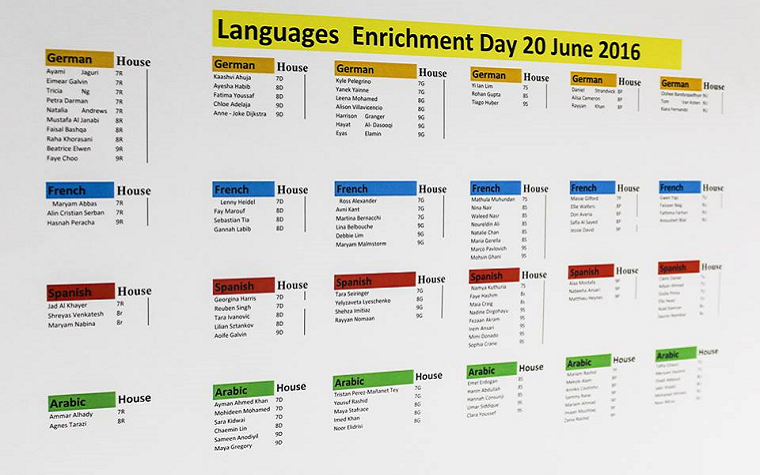 A language enrichment day allowed Doha College in Qatar to increase its language instruction for students in years seven, eight and nine.

The Key Stage 3 students experienced all languages taught at Doha College, namely Arabic, French, German and Spanish. In addition to the native tongue of each country, students also learned about the culture and customs of the people. The day was directed by His Excellency the British Ambassador Ajay Sharma.

As a conclusion to the teachings, students competed in houses and completed a video of the language of their choice, in addition to narrating poems. The students also performed role play and presented a musical performance in French.

Ambassador Sharma attended the closing ceremony and revealed his passion for the languages to Doha College students.

“Languages have been a very important part of my life both in school and outside of school,” Ambassador Sharma said. “Learning foreign languages opened up a world of books, TV and films and broadened my understanding of the world. I encourage you all to carry on learning; it is through language that we can understand different people and different cultures.”

Dr. Steffen Sommer, principal of Doha College, said languages have been identified as a driver for developing enhanced learning skills. “We are introducing languages from our Early Years primary education from September 2016 and will continue this multi-language education throughout our secondary education for all students as part of this focus on higher performance learning,” he said.

The Department of Languages at Doha College oversaw all the events of the day. The department’s six specialist teachers, including those who teach Arabic, French, Spanish and German, interacted with the students.

“Learning a language breaks down barriers and eliminates the fear of differences,” Anna Davies, Head of the Languages Department at Doha College, said. “It helps to enrich our appreciation of human diversity, which is essential in our multicultural and multilingual world. The success of today is a testimony to how exciting language learning at Doha College can be. The passion of our students to speak French, German, Spanish and Arabic proves their desire to communicate and work with others and is an excellent life skill.”