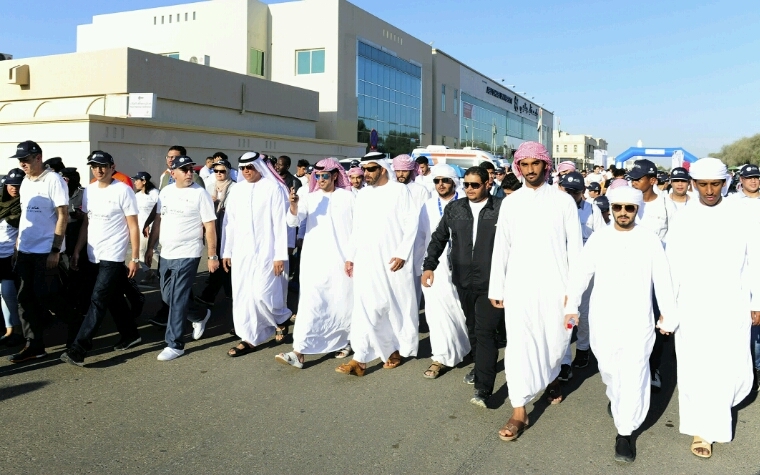 Abu Dhabi University (ADU) today hosted the Sheikh Zayed Walkathon, one of the initiatives announced as part of its Year of Zayed Strategy 2018, at its Al Ain campus. Honoring the memory of the founding father of the UAE, late Sheikh Zayed bin Sultan Al Nahyan, the event paid tribute to his legacy, and celebrated his pioneering vision that drove the progress of the UAE since its establishment in 1971, as well as the principles and values that he instilled in the nation.

His Excellency Salem Mubarak Al Dhaheri, Executive Director of Community Relations at ADU, said: “The Year of Zayed commemorates the great achievements of the UAE’s founding father, who was an exemplary leader and humanitarian. Several of the humanitarian initiatives he launched have transcended the borders of the UAE and are widely acknowledged across the globe. His relentless efforts have greatly elevated the country’s global standing and helped establish the UAE as a symbol of cultural tolerance, peaceful coexistence and harmony.”

He added: “With the Year of Zayed Walkathon, we aimed to celebrate the UAE’s development journey, and invite the community to continue the legacy of our founding father and follow his wise teachings that inspire our leadership and the nation to this day. The event will be the first of several similar initiatives this year and reflects ADU’s role as a leading institution in promoting national identity and ensuring that the youth of the UAE appreciate and value their heritage.”

The walkathon drew the participation of around 350 ADU students, faculty and staff as well as members of the local community. Looping over 2.2 km, the route started and ended at the main gate of the campus. The event also featured activities targeting different age groups and included children’s games and an award ceremony for the participants.