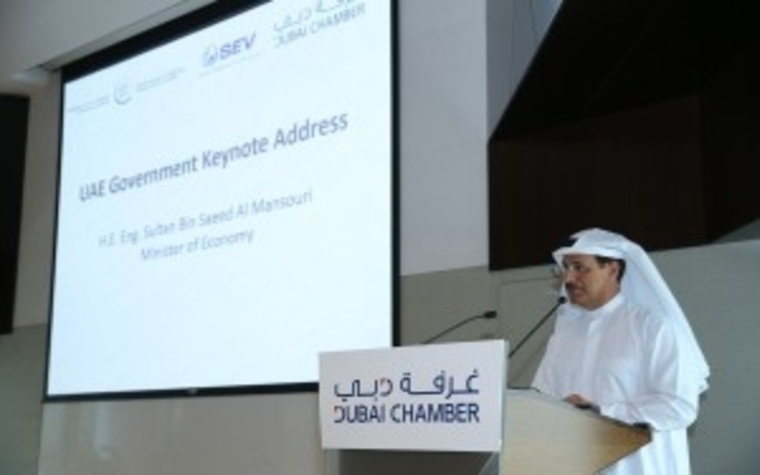 The UAE is keen to expand cooperation with Greece in the areas of innovation, entrepreneurship and SMEs, trade, industry, agriculture and renewable energy

During his keynote speech, H.E. Al Mansoori explained that the UAE and Greece enjoy a dynamic economic relationship which has strengthened in recent years thanks to the formation of partnerships in various fields and sectors. He noted that the forum provided an ideal opportunity to exchange ideas and explore new avenues of economic cooperation.

“The UAE is keen to intensify its cooperation with Greece in many areas of common interest, such as the SME sector, innovation, entrepreneurship, trade, industry, tourism, agriculture and renewable energy,” H.E. Al Mansoori said.

The UAE’s economy minister revealed that non-oil trade between the two countries exceeded $212 million in the first nine months of 2017, marking growth of 10% over the same period in 2016.

In his keynote address, H.E. Katrougalos expressed the Greek government’s keenness to strengthen its relations with the UAE, especially in the areas of tourism and SMEs, and noted that Greece’s economy returned to growth in 2017, adding that the country’s GDP growth is expected to rise further this year.

H.E. Katrougalos revealed the importance of boosting cooperation between UAE and Greek businesses in tourism, as the sector contributes around 37% to Greece’s GDP.

For his part, H.E. Al Ghurair highlighted the historic and deep ties that exist between the UAE and Greece, and noted that several important steps have been taken by both governments to boost bilateral trade and investment in recent years, such as the opening of the UAE’s embassy in Athens, the expansion of direct flights between the two countries, and the signing strategic cooperation agreements on aviation, investment protection and double taxation.

H.E. Al Ghurair revealed that the number of Greek companies registered with Dubai Chamber has grown steadily to exceed 170 companies today, and expressed the Chamber’s intention to facilitate new partnerships between UAE and Greek businesses.

“We see huge potential to expand cooperation in key sectors such as energy, food and agri-business, pharmaceuticals, banking, construction and ICT,” Dubai Chamber’s Chairman said, adding that Greek businesses can benefit from leveraging Dubai’s position as a re-export hub with strong links across the Middle East, Africa and Asia.

For his part, H.E. Humaid Ben Salem said the forum served as the right platform to facilitate investment and trade partnerships between companies and business on both sides. He also noted that the event provided an ideal opportunity for UAE and Greek businessmen to network and explore new prospects.