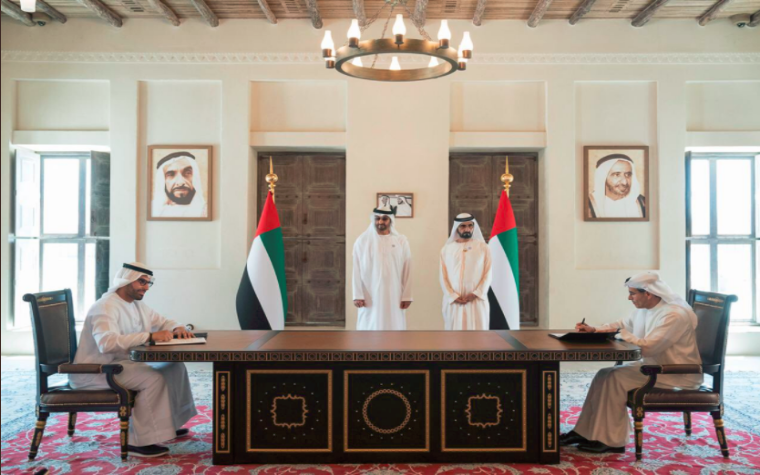 Vice President and Prime Minister of the UAE and Ruler of Dubai His Highness Sheikh Mohammed bin Rashid Al Maktoum and Crown Prince of Abu Dhabi and Deputy Supreme Commander of the UAE Armed Forces His Highness Sheikh Mohamed bin Zayed Al Nahyan today attended the announcement of a joint venture (JV) between Aldar Properties (Aldar) and Emaar Properties (Emaar) to develop the world's next era of iconic destinations that will shape the UAE's ever-evolving skyline.

His Highness Sheikh Mohammed bin Rashid highlighted the importance of cooperation between the UAE's two leading developers. "We are happy to witness the signing of this partnership, which will contribute to our development journey and help enhance the UAE's position as a tourism destination of choice. We have great ambitions and we are confident our national firms have the capabilities to achieve them. We want our companies to be at the forefront of our development and collaborate with each other to explore creative ideas for strengthening the UAE's leadership, and enhancing the happiness and quality of life of our people."

His Highness Sheikh Mohamed bin Zayed applauded the major partnership between the two firms, and wished them success in promoting growth and excellence. This partnership aims to create new opportunities for investment growth, and identify innovative projects that can enhance the UAE's leadership and competitiveness, His Highness said.

In a first for the country's leading developers, the JV signifies the strong bond between Abu Dhabi and Dubai as they seek to cement the UAE's reputation for creating the world's most innovative developments. The JV, with a targeted AED 30 billion national and international development pipeline and an initial focus on two projects, brings together the capabilities of the country's leading developers to deliver exceptional destinations, designed with a focus on people and future lifestyle trends. It also acts as a catalyst for other potential co-investment opportunities between the developers in Abu Dhabi and Dubai.

In the presence of His Highness Sheikh Mohammed bin Rashid Al Maktoum and His Highness Sheikh Mohamed bin Zayed Al Nahyan, as well as senior government officials from Abu Dhabi and Dubai, the historic JV was signed by His Excellency Mohamed Khalifa Al Mubarak, Chairman of Aldar Properties, and His Excellency Mohamed Alabbar, Chairman of Emaar Properties.

His Excellency Mohamed Khalifa Al Mubarak said: "Without doubt, the joint venture will expand the country's portfolio of iconic real estate projects and there is no limit to the development possibilities created by the JV partnership between Aldar and Emaar. Individually, we have developed some of the world's most awe-inspiring buildings and together, we have an incredible proposition that will contribute to achieving our national vision and make the UAE an even more exciting place to live and visit."

His Excellency Mohamed Alabbar added: "This joint venture is a strong testament to the spirit of partnerships that have contributed to establishing the UAE as a global hub for business and leisure. The world-class lifestyle destinations that we develop will add to the civic pride of the nation, and further enhance its appeal as an investment and lifestyle destination. We are drawing on our proven competencies in delivering high quality master-planned communities that have not only redefined lifestyles but also created tremendous economic value for our country. This partnership sends a powerful message that the UAE is at the forefront in shaping global real estate trends, and also signifies the unbreakable bond between the two emirates."

The JV will initially focus on two projects – one in Dubai and one in Abu Dhabi, demonstrating the co-investment between the two developers. The master-planned destination in Abu Dhabi will be situated in one of the country's most strategic and valuable locations in the heart of the Emirate's Cultural district on Al Saadiyat Island, named Saadiyat Grove. The development is set to become Abu Dhabi's most coveted address, serving as a hub for visitors to three world-class museums as well as residents of the island, which is synonymous with natural beauty, cultural experiences, architectural splendour and vast business potential. The development will provide a pivotal link between the Louvre Abu Dhabi, which opened to international acclaim in November 2017, as well as the planned Zayed National Museum, the UAE's first national museum, and the Guggenheim Abu Dhabi.

Set to open in 2021, the mixed-use development will feature close to 2,000 residential units, two world-class hotels, 400 serviced apartments and 130,000 square metres of experiential lifestyle and retail space, designed with a focus on the lifestyles of the future and millennials. It will further enhance the appeal of Abu Dhabi and cement the standing of the Emirate's Cultural District as a leading destination for the arts and an enviable residential location.

Located off King Salman bin Abdulaziz Al Saud Street, in the area between Jumeirah Beach Residence and Palm Jumeirah, Emaar Beachfront has direct access to Sheikh Zayed Road and Dubai Marina. Residents will be within close proximity of Dubai Harbour, currently under development by Meraas, which will feature a waterfront shopping mall, the Middle East's largest marina with over 1,100 berths, a yacht club, luxury hotels and a choice of retail, dining and entertainment attractions.

The JV between Aldar and Emaar will focus on creating remarkable destinations in some of the country's most sought-after locations through a series of joint master-planned developments.