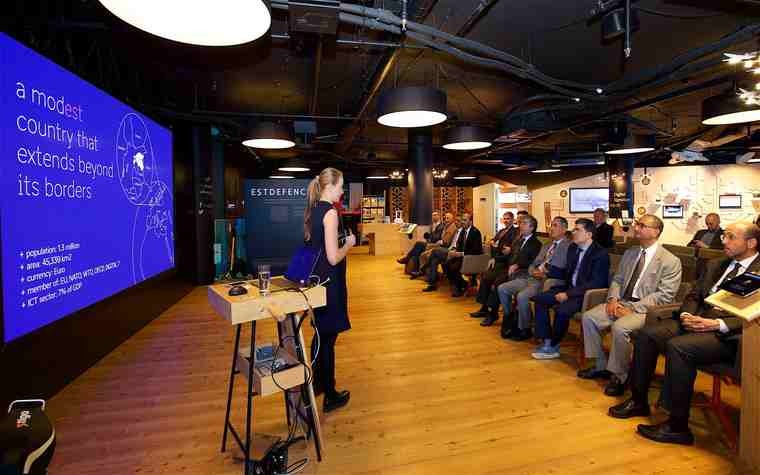 Dubai Chamber of Commerce & Industry issued the following announcement on May 8.

The Dubai Chamber of Commerce and Industry has announced plans for state-run trade and investment promotion agency Enterprise Estonia to open a representative office at its premises in Dubai before the end of this year.

The announcement was made during a business roundtable in Tallinn, Estonia, which was hosted by the Chamber in cooperation with Enterprise Estonia and attended by a Dubai Chamber-led delegation, as well as Estonian government and business leaders.

The roundtable was organised as part of Dubai Chamber’s high-level roadshow to the Baltic states, which is taking place May 6th-May 11th. The roadshow is exploring trade and investment opportunities in Estonia, Latvia and Lithuania, and the delegation is joined by prominent businessmen representing leading companies in the UAE.

During the roundtable, Dubai Chamber officials welcome the announcement of Estonia’s planned representative office in Dubai which they said would provide companies in Dubai with valuable insights on investment opportunities in the dynamic European country.

H.E. Majid Saif Al Ghurair, Chairman of Dubai Chamber, noted that Estonia is among the world’s most attractive hubs for ICT, smart city solutions and entrepreneurship. He described the Baltic country as a market of strategic importance which offers tremendous business potential to Dubai Chamber members and the wider business community in Dubai.

Dubai Chamber’s Chairman revealed that Dubai’s non-oil trade with Estonia exceeded $55 million in 2017, and explained that there is plenty of scope of bilateral trade in the future. He noted that the roadshow to Estonia followed a recent trade mission to the Baltic states led by the UAE Ministry of Economy, and said that such efforts reflect the UAE’s strong commitment to strengthening its ties with countries in the region.

In addition, H.E. Al Ghurair revealed the Chamber’s plans to organise a country focus briefing in Dubai soon which would aim to familiarise companies in the emirate with business opportunities in Estonia.

For his part, H.E. Hamad Buamim, President and CEO of Dubai Chamber, and called for the launch of direct flights between Dubai and the Estonian capital of Tallinn and said such a development would build new bridges between UAE and Estonian companies. He said the Chamber-led roadshow provided an ideal opportunity for UAE businessmen to learn about Estonia’s business environment and explore new growth prospects within the country’s telecommunications, information technology, tourism, healthcare and agricultural sectors.

H.E. Buamim revealed that the Chamber is coordinating with Estonia’s Ministry of Economic Affairs and Communications on efforts to double the number of Estonian companies in Dubai by 2019. He encouraged Estonian companies to participate in Expo 2020 and benefit from the unique advantages and opportunities that the mega event has to offer them.

Viljar Lubi, Deputy Secretary General, Economic Development, Ministry of Economic Affairs and Communications of Estonia, highlighted the many synergies shared by the UAE and Estonia and said that establishing direct air links between the two countries would be an important factor which would forge stronger bilateral ties.

H.E. Hisham Al Shirawi, CEO of Oasis Enterprises, spoke about the various advantages that Dubai offers Estonian businesses as a strategic gateway providing easy access to markets across the Middle East, Africa and Asia, adding that the emirate also hosts hundreds of regional and global exhibitions and conferences every year providing plenty of business partnership opportunities.

The visiting delegation participated in a separate meeting with H.E. Urve Palo, Minister of Entrepreneurship and Information Technology of Estonia, who expressed her country’s intention to improve its relations with the UAE, as reflected in its decision to open an embassy in Abu Dhabi soon.

H.E. Palo requested the support of Dubai Chamber in facilitating the launch of direct flights between Estonia and Dubai. She invited the Chamber to participate in the Latitude59, the flagship startup and tech conference of e-Estonia which will be held later this month in Tallinn. She also encouraged UAE companies to explore investment opportunities within Estonia’s dairy’s industry.

H.E. Ghurair invited Estonia’s Minister of Entrepreneurship and Information Technology to participate in the country focus briefing on Estonia which will be held in Dubai soon, and encouraged Estonian companies to attend major global events hosted in Dubai every year, including GITEX, Gulfood and Arab Health.

H.E. Buamim pointed out that Dubai Chamber places a major focus on supporting startups and entrepreneurs, and said the Chamber is keen to attract innovative business ideas and discuss prospects for joint ventures and cooperation between Dubai-based startups and their Estonian counterparts, given Estonia’s reputation and attractiveness as a top startup country in the EU.