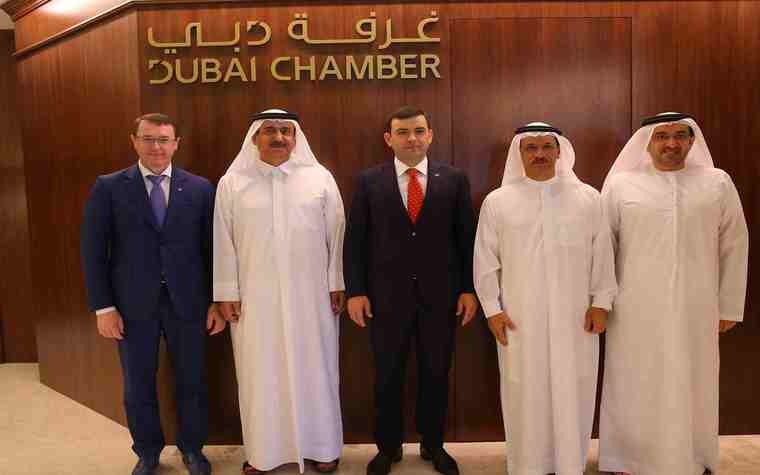 Dubai Chamber of Commerce & Industry issued the following announcement on May 9.

The Dubai Chamber of Commerce and Industry hosted the UAE-Moldova Business Forum at its premises today, which was attended by a high-level Moldovan delegation led by H.E. Chiril Gaburici, the country’s Minister of Economy and Infrastructure.

During his opening speech, H.E. Al Mansoori emphasised the remarkable development of the bilateral relations between the UAE and Moldova considering both countries’ interest in advancing economic and trade cooperation, which was reflected in the high-profile visits between the two countries and the signing of several specific cooperation agreements geared towards the development of more fruitful partnerships.

H.E Al Mansoori noted that one of the most important steps taken by the two countries were plans to establish the Joint Economic Committee as part of the cooperation agreement, which he described as an important platform to discuss mutual areas of cooperation, as well as opportunities and challenges for investors and businessmen in both countries.

The UAE’s Minister of Economy described the forum as an important platform to enhance communication between the UAE and Moldovan business communities, adding that the private sector has a key role to play in forging economic relations. He revealed that non-oil trade between the UAE and Moldova amounted to $8.2 million in 2017 with non-oil exports increasing by 33.7% compared to the previous year. He further noted that there is great potential to grow this volume in the near future.

H.E Al Mansoori highlighted the attractive business and investment environment in the UAE, in addition to growth plans outlined under the UAE Vision 2021. He spoke about recent efforts to develop the country’s potential in the areas of knowledge and innovation, and identified renewable energy, water, transport, technology, health, education and space as key sectors which are expected to drive the UAE’s economic growth in the future.

In his special address, H.E. Gaburici said: “The United Arab Emirates is a potential market to be capitalized both for the export of domestic products and as a source of foreign investment. Participating in this event is an opportunity for Moldovan companies to present their services and products.”

H.E. Gaburici described the Forum as a platform providing access to new trade opportunities and potential business partnerships between Moldovan and UAE companies.

Addressing the Moldovan delegates, H.E. Al Shamsi said the UAE and Moldova have unique strengths that can complement each other, adding that there is plenty of scope to expand Dubai’s trade with the Eastern European country.

“This important forum comes at a time when Moldova is pushing ahead with reforms and privatizing state-owned enterprises. These trends are creating plenty of business opportunities in various economic sectors such as logistics and tourism where Dubai-based company can lend their expertise and investment,” said H.E. Al Shamsi.

Dubai Chamber’s Vice Chairman noted that Moldova’s agricultural sector offers a great deal of untapped potential, and said that the country would benefit greatly by cooperating with the UAE on food security. He concluded by pledging Dubai Chamber’s full support in facilitating Dubai-Moldova trade and ensuring that bilateral relations flourish in the future.

The forum also featured a presentation from Moldova Investment and Export Promotion Organization (MIEPO) focusing on attractive investment opportunities opening up in Moldova. A total of 80 bilateral business meetings were held following the event which were joined by a wide variety of Moldovan companies and their UAE counterparts.