EMAAR PROPERTIES: Join Alessandro Del Piero and Emaar to celebrate the football fever and win a dream #EmaarGoldenHome in Dubai 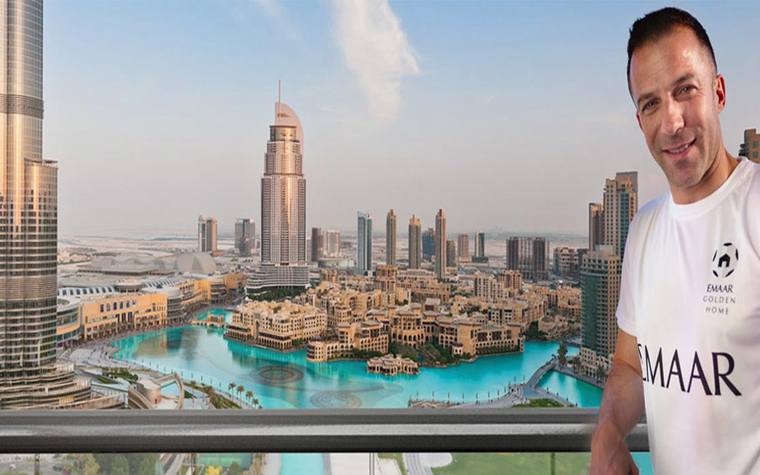 Cheer your favourite teams this season, share your thrills on Twitter and win an #EmaarGoldenHome on July 15, on the final day of the world’s much-loved football championship.

Open to all from across the world, the #EmaarGoldenHome contest kicks off on June 25, with Italy’s sensational hero Alessandro Del Piero (@delpieroale), who was part of the country’s 2006 World Cup winning squad, sharing a video on how to take part in the competition.

Participation is simple. All you have to do is to tweet a creative photo or video of you or your family/friends playing or watching football in your home, and tag @emaardubai with the hashtag #EmaarGoldenHome.

Ahmad Al Matrooshi, Managing Director of Emaar Properties, said: “We are joining the world in celebrating the football frenzy with the never-before opportunity to own a dream home in one of our elegantly master-planned lifestyle destinations in Dubai. People anywhere in the world can take part to win the #EmaarGoldenHome.”

Benjamin Ampen, Managing Director, Middle East & North Africa of Twitter, said: "Given the public and real-time nature of Twitter, recent research reveals that Twitter sports fans are passionate about football. #EmaarGoldenHome is a great example of how Emaar is leveraging the power of video to engage with such an audience globally, exclusively on Twitter.”

Alessandro Del Piero added: “Football is a passion for millions across the world, and it reaches its crescendo during this season. I am delighted to partner with Emaar and Twitter on this fantastic campaign that will see football fans kick-off their dreams to win an #EmaarGoldenHome.”

The last date for entries is July 11. On July 15, the winner will receive the #EmaarGoldenHome in the Emaar destination of the winner’s choice. Go to @emaardubai on Twitter and let the action begin!

Warming up for the #EmaarGoldenHome campaign, a Twitter poll on @emaardubaihas been already launched. Participants have been voting for their preferred destination to win the #EmaarGoldenHome from four spectacular locations by Emaar – Downtown Dubai, Dubai Creek Harbour, Dubai Hills Estate and Emaar South. These four mega-developments in Dubai by the global developer, with a presence in over 16 countries, are iconic destinations offering four varied lifestyle choices.

Downtown Dubai is already the world’s most visited lifestyle destination, and home to Burj Khalifa, The Dubai Mall, The Dubai Fountain and Dubai Opera. Dubai Creek Harbour will feature the iconic Dubai Creek Tower and a world-class retail district in addition to spectacular homes set by the Dubai Creek waterfront and opening to fascinating views of the city and the Ras Al Khor Wildlife Sanctuary.