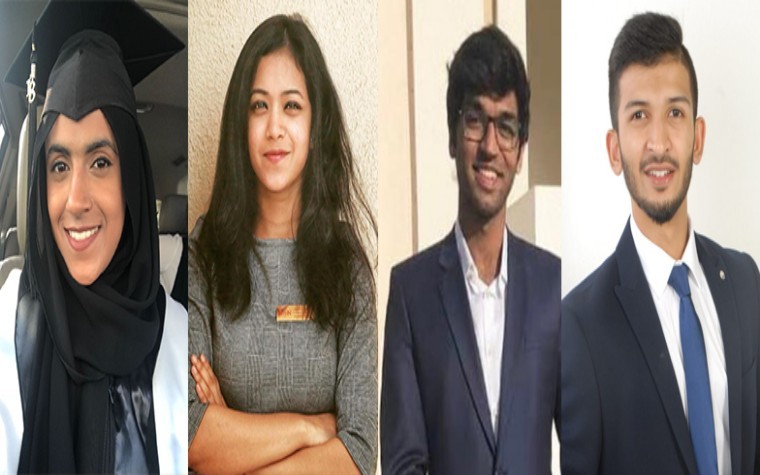 AUS business graduates Maazin Haque and Saifali Lokhandwala, and international studies graduates Ayesha Burney and Pooja Baburaj participated in the UA which is held under the patronage of the President of Ireland and recognizes the highest performing entrants from all around the world. The UA Program received 4,887 submission this year.

Baburaj, who was named the Regional Winner in Africa and Middle East in the category of politics and international relations, wrote her research paper on the political accession challenges facing Dalit women in India. “I wanted to write about this subject because the Dalit caste is one of the lowest in India and faces continuous racism. A woman of the Dalit caste will not only suffer from racism but also sexism, which prevents her further from holding any position of power,” she said. “India is known as one of the greatest democracies in the world and for a country to be democratic, everyone should have equal opportunities in society and the ability to be involved in the decision-making process.”

She further noted that one of the main reasons she decided to write about the subject was her own background. “I am from this caste and I am hoping one day to have a political career,” she said. Baburaj is currently working for Unilever on their Diversity Inclusion Agenda that aims to increase gender parity in the organization within the coming 10 years. “I am somehow working within the same field and on issues I am interested in. My goal in the future is to study law with a focus on human rights particularly in relation to women and children,” she said.

Alumnus Haque, who was named the Regional Winner in Economics in Africa and Middle East, chose to work on a subject he is passionate about— football. “I was tired of doing the standard economic papers about the effect of oil price on GDP, etc. I wanted to think outside the box and come up with a unique topic,” he said. “So I worked on a model that basically considers past data of match results between teams and uses this to create a sort of ranking of the football teams within the English Premier League to try to and predict the result of future matches. The testing criteria for the model was to see if it predicted results more accurately than the betting market models that give odds for each result. The model was, in fact, successful and outperformed several betting market models.”

Lokhandwala wrote his research on the effect of women's police stations on crimes against women in India from an econometric perspective. He was influenced by the struggles and sacrifices of women in the history of Islam and incidents of violence against women in India. “Using the econometric regression analysis, I evaluated the impact of women’s police stations on the different categories of crimes committed against women across 14 major states in India over a period of 13 years. It could be concluded that women police stations raised the cost of crime, and acted as deterrents. This was because of the high probability of arrests as a result of an increase in the rate of reporting by women, along with greater law enforcement and police responsiveness. The research is important in advocating the need for evidence-based policy efforts and allocating resources to institutions that make the country safer for women,” he said.

The alumni noted the impact of the education they received at AUS on the work they did and their approach to the world. “I was very happy with my university education and I was influenced by the professors who taught me. Also, the Department of International Studies at AUS is making great strides in terms of research and with the university positioning itself as a center of research, I believe that the department is going to shine,” said Baburaj.

Lokhandwala echoed her thoughts noting that the “diverse knowledge and experience of faculty in different branches of economics gave us the flexibility to choose the right advisors based on our topic and nature of our research. The professors were always happy to guide and advise us in order to improve our research,” he said.

Burney also noted the great impact her undergraduate years left on her. “My studies at AUS had a great impact on me. I took a number of international studies courses and that is when I realized how my perspective of the world started to change and how much this department had to offer. You learn something new every day and I fell in love with this major,” she said.