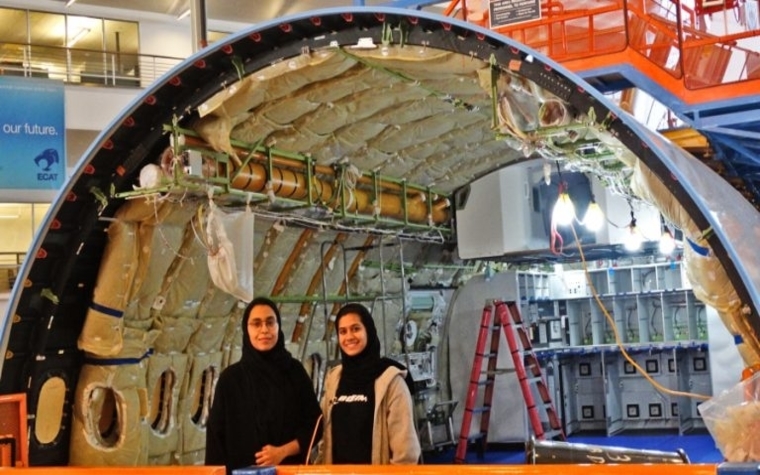 Two Khalifa University alumni have successfully contributed to three patents each in collaboration with others at The Boeing Company, where they interned for more than 18 weeks as part of an internship program sponsored by Mubadala Development Company.

BSc in Mechanical Engineering graduate Sara Al Amahri and BSc in Aerospace Engineering graduate Hind Saeed Ahmad Mohd Amin were among 12 students selected by Boeing from a group of 30 shortlisted by Mubadala. They had to go through a two-stage interview process to ensure their place in the final list.

Al Amahri spent Fall 2016 at the Colorado School of Mines and graduated from Khalifa University in July 2018. After her graduation, she spent four weeks at Boeing Everett preparing and training on different programs such as computer-aided three-dimensional interactive application (CATIA) and ENOVIA – a Product Lifecycle Management (PLM) software with a broad portfolio of technical and business applications. These first four weeks prepared Al Amahri for the two rotations she underwent at Boeing’s Design Engineering and Manufacturing Engineering departments, where she completed her 18-week internship.

Amin, who was also part of the Research Experience for Undergraduates (REU) program at the Colorado School of Mines, completed her engineering internship at Boeing’s South Carolina facility, where she worked to support the production of the 787 aircraft program.

During her Boeing internship, Hind submitted a total of three patents. Two of the patents came from projects where she worked with fellow intern Saif Altamimi, who is currently studying Aerospace Engineering at Perdue University, while the third patent was submitted with tooling department team.

Amin said: “All of the projects are tools that we have designed upon the request of mechanics who build the aircraft. The tools make it easier for the mechanics to perform a certain operation, which in turn reduces the manufacturing time and results in substantial savings for the company.”

Al Amahri described the internship at Boeing as a once-in-a-lifetime opportunity. She said: “I learned about the different aircraft programs that Boeing operates and designs. I worked specifically on the 787 program, a new aircraft that is made mostly of composite material unlike other aircraft in the world that are made out of aluminum.”

She has submitted three patents, which include Fuel Tank Pressure Test, Fastener Support Tool, and Caliper Protective Cover. These patents have also resulted in substantial savings for Boeing.

Al Amahri said: “I was placed for seven weeks in Design Engineering and the rest of the seven weeks in Manufacturing Engineering. I worked on design changes that reduce the time and cost at the first department. Later, I spent most of my time in the factory talking to mechanics and technicians to improve specific processes which will improve the manufacturing process.”

Both alumni are deeply grateful to Khalifa University for laying the foundation that enabled them to intern with an international industrial leader.

Amin said: “My studies at Khalifa University gave me the essential basics in Aerospace Engineering. However, I believe that in order to enhance our knowledge in a particular area, it is important to put the theories into practice. This is where programs such as the Boeing internship and the REU internship allowed me to gain a better understanding of my field of study, while Khalifa University provided me the basic knowledge to build upon.”

Al Amahri agreed, adding: “The four years I spent at Khalifa University were very productive, as I learnt all the technical skills needed to become a mechanical engineer. Khalifa University supports students and makes sure that enough opportunities are provided to students to support them in hands-on as well as extra-curricular activities. Those activities help develop our communication skills which also enable us to become successful engineers.”