KHALIFA UNIVERSITY: From Northeastern to Khalifa: Fulbright Program Brings Bioengineering Experience to KUCARS for a Year of Research 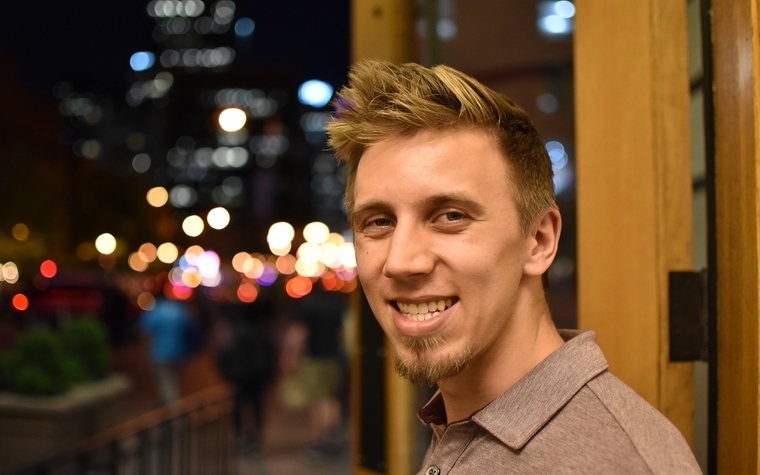 Conor Messer, recipient of one of the most prestigious and competitive fellowship programs in the world, has chosen the Center for Autonomous Robotic Systems (KUCARS) as his place of research for the next year.

“I was awarded the Fulbright through the US government in coordination with the UAE government,” explained Messer. “The fellowship exists to promote cultural exchange and provides me with support for academic research abroad for approximately one year. I am being hosted by KU, with Dr. Federico Renda in the Mechanical Engineering department as my advisor.”

The Fulbright Program is one of several United States Cultural Exchange Programs whose goal is to improve intercultural relations, cultural diplomacy, and intercultural competence between the people of the United States and other countries through the exchange of persons, knowledge and skills.

Founder of the program, US Senator J. William Fulbright, said the program “aims to bring a little more knowledge, a little more reason, and a little more compassion into world affairs and thereby increase the chance that nations will learn at last to live in peace and friendship.” Messer took inspiration from his experiences in Jordan, where he volunteered with refugees, during his time at Northeastern University in Boston. He took up Arabic language lessons and formed a student group aiming to break down misconceptions between Muslims and Christians and give followers of both faiths a space to learn more about each other.

Messer joins KU in the UAE’s Year of Tolerance, where tolerance is emphasized as a universal concept and sustainable institutional endeavor to bridge the people of the world and their various cultures in an environment of openness and coexistence. His work in Boston complements the values that are so important for the UAE, especially in The Year of Tolerance.

“As I prepared my application for the Fulbright, I knew I wanted to continue my studies in Arabic and be immersed in Arabic culture while also pursuing research in medical robotics,” said Messer. “As I explored the offerings of different universities in the region, it quickly became apparent that not only is Khalifa a top-notch university, but it also boasts one of the best robotics programs in the region. As a matter of fact, I had heard about the inaugural Mohamed Bin Zayed International Robotics Challenge (MBZIRC) through my research advisor back at Northeastern, so I knew there were a lot of new developments happening in the program. I was able to get in touch with Dr. Renda and together we came up with a proposal centered on the design and implementation of a soft robot for minimally-invasive surgery, furthering work already happening in his lab.”

Messer is currently a Visiting Research Intern in the Department of Mechanical Engineering, bringing his academic knowledge and degree in bioengineering from Northeastern University to KUCARS.

“With my background in biomechanical engineering and computer science, research on surgical robotics is a logical application of my skillset and passions,” explained Messer. “As a discipline, robotics is transforming many industries, with healthcare no exception. However, there are many concerns with safety when using robots in medical environments. Soft robots, with their inherent compliance and flexibility, are much safer to use in human interaction than their rigid counterparts and are currently being investigated for use in surgical intervention.”

Soft robots are a new trend in robotics research. Just as robots are asked to complete increasingly complex and intricate tasks, they are expected to do so in increasingly diverse environments. To achieve this, reconfigurable robots that are able to dynamically adapt their structures to accomplish their tasks are being developed. Dr. Renda, Assistant Professor of Mechanical Engineering, has been researching soft robots with a project on a flagellum-inspired soft underwater propulsor to achieve safe and reliable interaction with delicate environments such as oil pipelines.

“Soft robotics is a new branch of robotics that deals with highly deformable robots,” explained Dr. Renda. “The main driver is the search for advanced robots capable of intervention in unstructured environments, including human-robot physical interaction.”

“We are working specifically on a concentric tube robot that can be used in various minimally-invasive interventions from cardiac surgery to endonasal neurosurgery,” added Messer. “It can travel to hard-to-access locations while avoiding sensitive anatomies (unlike rigid robotic devices) and its complex geometry is controllable and allows for significant force application (unlike current surgical catheters). My research focuses on extending the design space of this robot to non-constant curvatures and developing an algorithm for its design and path planning, all of which should allow for better use of the robot in anatomies with tortuous geometries, such as the lungs, heart, and brain.”

KUCARS and the Healthcare Engineering Innovation Center are researching a new generation of continuum robots for force and stiffness control in endoluminal cardiac intervention. The goal is to create an automated robotic catheter that can safely navigate tis way through the heart, controlling contact force with tissue walls, and performing procedures such as angioplasties and valve repair.

“Conor has only been here a month so far, but we have already defined a nice research plan that can lead to non-negligible contribution in the field of continuum robotics for medical application,” said Dr. Renda of Messer. “I also involved him in other smaller research activities with other members of my team, including MSc students. It seems that they are doing well together and everything is going smooth so far.”

“I have been enjoying my life here thus far, both the research as well as my social life,” he said. “In only a month and a half, I feel I have found some good friends and become accustomed to the university. Though I certainly have some hard days and do miss friends and family back home, I am enjoying life here in Abu Dhabi.”