COUNCIL OF SUDI CHAMBERS: With the participation of more than (100) Mauritanian companies, the Saudi-Mauritanian business meeting at the Council of Saudi Chambers is looking to strengthen commercial partnerships 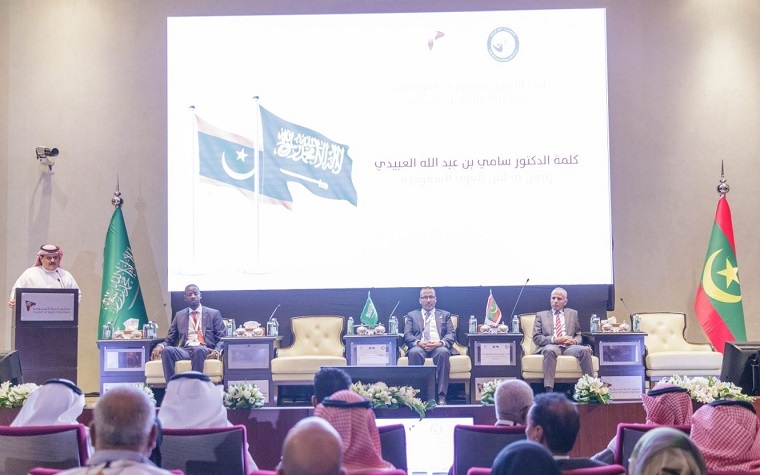 The Council of Saudi Chambers organized today (Sunday) at its headquarters in the Saudi-Mauritanian business meeting, in the presence of the Chairman of the Council of Saudi Chambers, Dr. Sami bin Abdullah Al-Obeidi, President of the National Union of Mauritanian Employers Mohammed Zain Al-Abidin and the Secretary-General in charge of the Council of Chambers Hussein Al-Qadir, and with the participation of more than (100) Mauritanian companies and institutions. In various sectors and a number of officials and business owners from both sides.

At the beginning of the meeting, the President of the Council of Saudi Chambers, Dr. Sami bin Abdullah Al-Obaidi, affirmed that the Kingdom's 2030 vision seeks to strengthen economic relations with friendly and brotherly countries, including the Republic of Mauritania, pointing to the support of all concerned parties in the Kingdom to hold the meeting with the aim of raising the average volume of trade exchange between the two countries Which amounted to about 88 million riyals in 2018.

Al-Ubaidi said that the Saudi-Mauritanian business meeting provides an opportunity for business owners from both sides to expand the horizons of cooperation in all economic fields, and to find out the investment and commercial opportunities available to the business sectors of the two friendly countries. Noting the need to redouble efforts at all levels of government and the private sector, to raise the volume of trade exchange between the two countries, and to create more economic partnerships that the two countries focus on in their future vision 2030, such as mining, agriculture and livestock, industry, infrastructure and services.

For his part, the President of the National Union of Mauritanian Employers Mohamed Zein El Abidin welcomed Saudi-Mauritanian partnerships in various business sectors, and said that the delegation of the Mauritanian National Federation of Employers represents the largest Mauritanian businessmen delegation that visited Saudi Arabia and includes more than 100 companies from the union's office and heads of federations and active institutions In various fields, to attend the economic meeting of Mauritanian and Saudi business owners, which represents a qualitative shift in the history of economic relations between the two countries, to enhance the available cooperation opportunities, and to review ways to enhance their partnership in the commercial fields, otherwise Economic, as the size of capabilities, capabilities and quality of readiness create broad prospects for cooperation between business owners from both sides and open channels for unprecedented investments and numerous and diverse partnerships.

The meeting witnessed the presentation of a number of offers from the Saudi side, including the presentation of the General Investment Authority for the food and pharmaceutical industries sectors, in addition to the offer of the Export Development Authority, the Saudi Export Program on services and the Kingdom's efforts to raise the proportion of non-oil exports to about 50 %. While the Mauritanian side presented visual presentations to a number of Mauritanian government agencies, it addressed the business climate and promising investment opportunities in the Republic of Mauritania and the incentives provided to investors in a number of areas including energy, minerals and gas, hunting, agriculture and livestock, and financial services.

On the sidelines of the meeting, a ceremony was signed for signing an agreement between the Saudi Flag Company and the Mauritanian Smart-MA-SA company to cooperate in the field of digital transformation in the Mauritanian market.